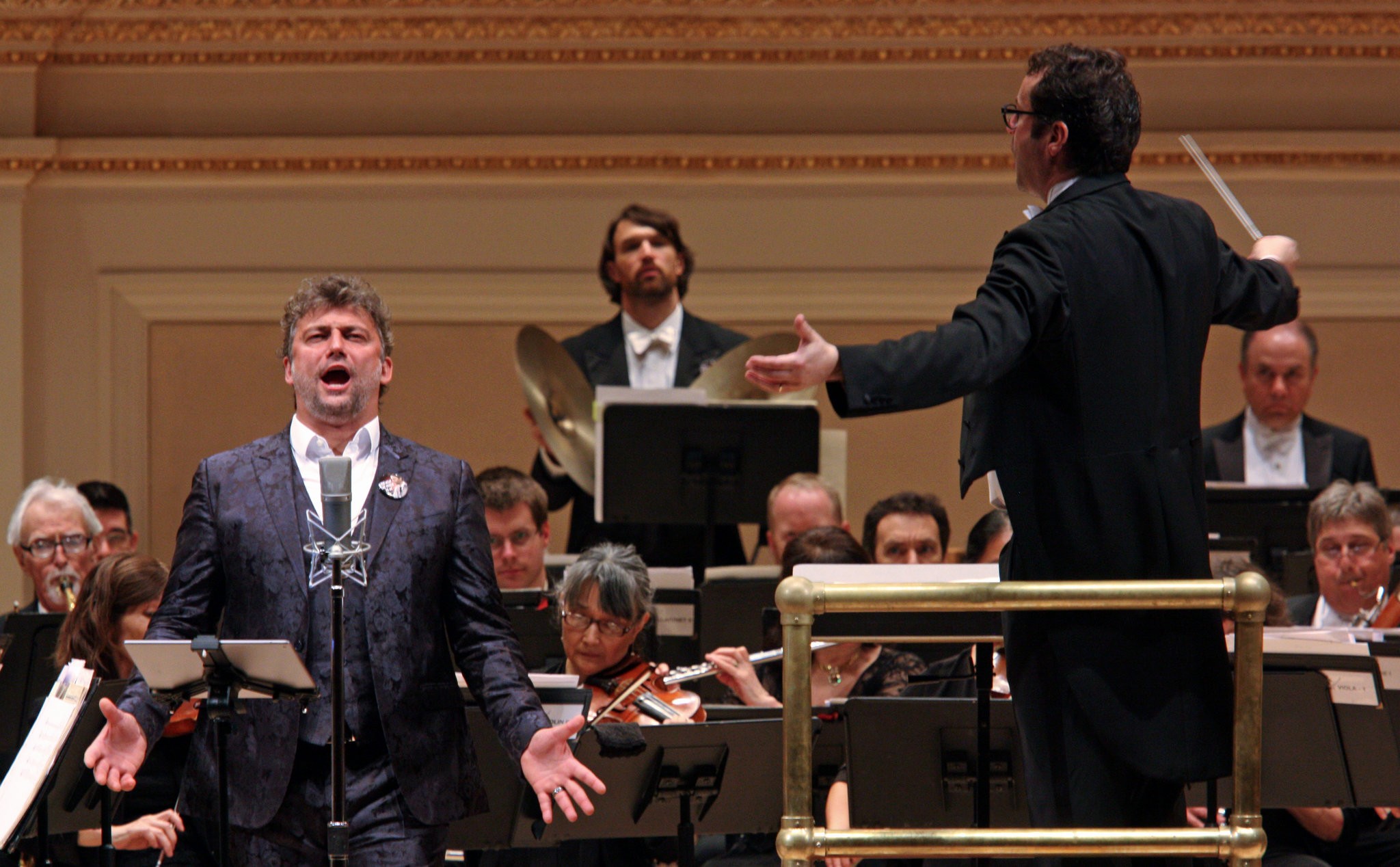 Jonas Kaufmann, left, performing at Carnegie Hall on Friday night with the Orchestra of St. Luke’s, directed by Jochen Rieder

Jonas Kaufmann does not need a microphone, he wants you to know. At the start of “You Mean the World to Me” at Carnegie Hall on Friday, this star tenor addressed the audience to explain the Art Deco-style mic planted in front of him.

“It’s not so much that I’m getting old and feel I can’t fill Carnegie Hall with my voice,” Mr. Kaufmann, 49, said, drawing indulgent laughter. “It’s the atmosphere.”

He explained that the evening’s program of operetta arias and film songs from the 1920s and ’30s spanned a range of instrumentation from full orchestra to chamber jazz ensemble and that amplification helped unify different sound worlds. But, he added, “don’t be afraid that I’m hiding behind it.”

Mr. Kaufmann’s vocal prowess was hardly in doubt. He continues to be one of the most sought-after tenors with the stamina and heft for Wagner and the ardent warmth for Italian opera. (Next week he steps into the Metropolitan Opera’s production of Puccini’s “La Fanciulla del West.”) With its dark shadings, his tenor sounds the way he looks — matinee idol features offset by designer stubble.

With his program of songs popular in the Berlin of the Weimar Republic, Mr. Kaufmann dials up the swoon factor. The arias from operettas by Franz Lehar and Emmerich Kalman and songs from the silver screen by composers including Robert Stolz and Hans May brought to life a moment just before popular music forked off from the classical tradition. The texts — about the loneliness of an empty bed, feverish dreams, the permissive darkness of a Viennese alley — are coy but knowing. The formal lyricism of the vocal lines creates tunes that flatter the ear and lodge themselves in the memory after a single hearing.

Whether these tunes are orchestrated with syrupy strings and rippling harps as in Richard Tauber’s “Du bist die Welt für mich,” which lends the program its title, or set with a jazz shimmer like Stolz’s “Im Traum hast Du mir alles erlaubt” (“In my dream you allowed me everything”) this is music like liqueur: sweet, sticky and apt to loosen listeners up . The Orchestra of St. Luke’s, directed by Jochen Rieder, played it with idiomatic style.

In the transitions from full-bodied operatic singing to crooning, Mr. Kaufmann’s different levels of experience showed through. He was magnificent when he belted out “Freunde, das Leben ist lebenswert” (“Friends, life is worth living”) from Lehar’s “Giuditta,” a proud and fiery aria. In a song like “Im Traum,” where he produced phrases in a silky head voice that faded to falsetto, it sometimes sounded like he was still experimenting with the effects of the microphone. But he gave a beautiful rendering of Mischa Spoliansky’s “Heute Nacht oder nie” (“Tonight or never”). He calibrated his voice exquisitely to the accompanying chamber ensemble, in which a solo violin acts like a wing man to the serenading singer.

Ultimately the possibilities a microphone opens up — the way a voice can suddenly insinuate itself into a radio listener’s private space — are best mined by singers who are also actors. Mr. Kaufmann doesn’t quite have a cabaret performer’s intuition for how to sex up a seemingly innocent word with innuendo or irony in the occasional near-spoken phrase. But hearing this repertory sung by a consummate opera performer helped illuminate a musical moment suspended between nostalgia and modernity.

A version of this article appears in print on Oct. 9, 2018, on Page C4 of the New York edition with the headline: Some Amplification Helps Dial Up the Swoon Factor.
click this link to go to the original New York Times article
Back