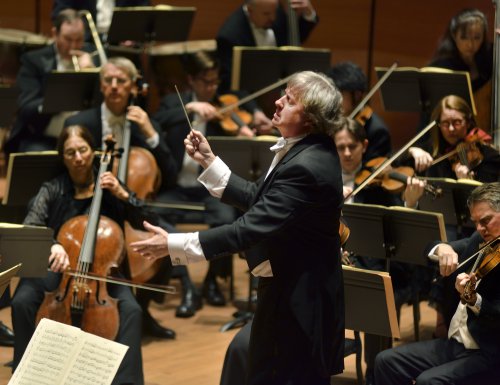 Tuesday’s concert by The American Classical Orchestra under its conductor Thomas Crawford at the Church of St. Mary the Virgin (AKA “Smoky Mary’s”) served its audience a wide range of music although it may have proved a surfeit of riches. The evening opened with the orchestra’s excellent chorus joining in a rare gem: one of the Chandos Anthems, Handel’s earliest English church music. Lianne Coble and Lawrence Jones were the appealing soloists…

I would happily have enjoyed several more Anthems but instead we got a very polished John Thiessen in a Torelli trumpet concerto followed, surprisingly, by Allegri’s serenely beautiful masterpiece, the Miserere. Alternating chants and verses, ten members of the chorus sang from in front of the altar while four performed from the choir loft above and behind the audience. The effect was magical…

After intermission came the evening’s raison d’être, the likely New York (and possible US) premiere—although it was not announced as either—of the haunting Maddalena ai piedi di Cristo by Antonio Caldara featuring the superb Czech soprano Hana Blazíková. This oratorio, presumably written for Venice around the turn of the 18th century, depicts the struggle for the soul of the repentant sinner Mary Magdalene.

Crawford writes movingly in the program of his discovery of Caldara’s piece and his search for the elusive, unpublished score… In alternating arias, Amor Terreno (Earthly Love) and Amor Celeste (Heavenly Love) offer combative commentaries on Maddalena’s decision to foreswear sin and devote herself to Christ. She remains resolute and is ultimately transformed from a “slave of Cupid” into one of the early Christianity’s most poignant converts.

The small band of strings (with a bassoon added to the continuo) coped well with Caldara’s evocative, colorful writing… Maxine Neuman was particularly eloquent in the many arias which featured a cello obbligato.

Luckily, Crawford sought out and invited Blazíková to sing Maddalena, and her participation made the long evening immensely rewarding…  From her very first recitative as Maddalena, it was clear that this was an artist of the first rank… touchingly conveying Maddalena’s sometimes rocky spiritual journey.Thanks to Blazíková’s superlative Maddalena, Caldara’s oratorio made its mark.