Review: Soundtrack for Bird and Turtle, and Other New Music, New York Times by Allan Kozinn 3-29-2011 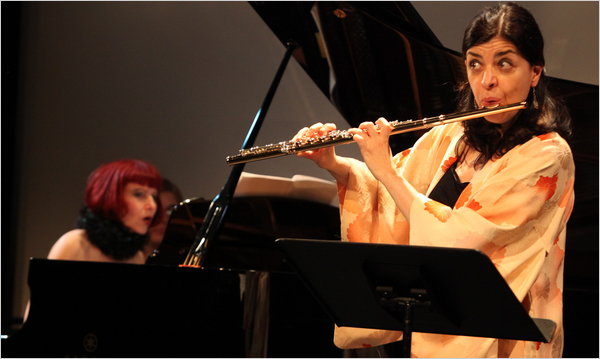 MUSIC REVIEW Published: March 29, 2011Soundtrack for Bird and Turtle, and Other New MusicMichelle V. Agins/The New York TimesKathleen Supové, left, and Sato Moughalian performed at Symphony Space on Monday.By ALLAN KOZINNThe composer and conductor Victoria Bond has always devoted her Cutting Edge Concerts series to recent works, but she has tinkered with the format over the years. For several seasons, she tried to prod listeners, and perhaps performers, to think differently about music by bringing in artists from other disciplines to discuss what they do. More recently, Ms. Bond has reconfigured the series as a new-music festival. Chat remains a component, but now it is entirely musical: each performance is introduced by an interview with the composer, and Ms. Bond is adept at getting composers to speak concisely about their goals and processes.

Her plan was to have every composer whose work is played in the four-concert series on hand for these interviews, but in the opening installment, on Monday evening at the Leonard Nimoy Thalia at Symphony Space, one of the five composers bowed out: Laurie Anderson, at work on a project inBrazil, was unable to get back to New York for the performance.

Actually, Ms. Anderson’s work, to which the second half of the program was devoted, was not a performance as such but a screening of “Hidden Inside Mountains,” a 25-minute film she made for Expo 2005, in Aichi, Japan. The score, an affecting electronic work for Ms. Anderson’s electric violin,percussion, keyboards, bass, voices and effects, is accompanied by beautiful but mystifying imagery and short bursts of text (“Sometimes I think I can smell light”) in Ms. Anderson’s quirky, aphoristic style.

Accessibility appears to have been the key to this opening concert; dissonance was used only in the most painterly way, and references to folk and popular music were plentiful. Peter Schickele’s “Music for Orcas Island,” an easygoing piano quartet, begins with an invitingly folksy vocation of a spring day, and later uses pizzicato effects to evoke rain, and thick-textured, quickly morphing harmonies to suggest billowing clouds. The musicians — Renee Jolles, violinist; Daniel Panner, violist; MaxineNeuman, cellist; and Kathleen Supové, pianist — played the music with an appealing suppleness. The program began with Hannah Lash’s “Folksongs: I, II, III, IV,” an appealing set of short, sweetly melodic pieces for piccolo,harp and exotic, light-textured percussion, performed by Maya, a trio with that unusual constitution. The folk melodies were imagined rather than quoted, and most of the action was in the piccolo line, which Sato Moughalian shaped gracefully, with subtle touches in both Bridget Kibbey’s rendering of the harp line and John Hadfield’s tactile percussion playing. Ms. Moughalian switched to flute and was joined by Ms. Supové in Jon Deak’s “Bye-Bye!,” which required both players — but mostly Ms.Moughalian, between descriptively chirping flute lines — to narrate the story of a bird and a turtle traveling from Haiti to New York, and Randall Woolf’s “Righteous Babe,” in which Ms. Moughalian and Ms. Supové mined the energy in an expanding series of blues riffs.