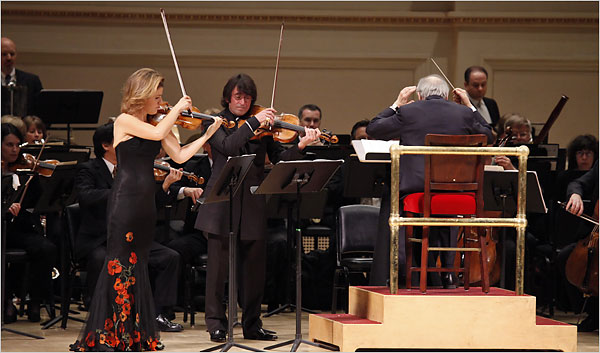 André Previn Leads Debut of His Concerto for Violin, Viola and Orchestra

The violinist Anne-Sophie Mutter and the violist Yuri Bashmet, with the Orchestra of St. Luke’s, conducted by André Previn.

André Previn, the multifaceted musician whose 80th birthday has been celebrated in a series of recent events at Carnegie Hall, has said that he likes to compose for specific performers. Given the starry circles in which he has traveled, Mr. Previn has had his pick of the greats. His Concerto for Violin, Viola and Orchestra, written in 2006 and given its premiere during a concert in which Mr. Previn conducted the Orchestra of St. Luke’s on Sunday afternoon, featured two of the world’s finest string players: the violinist Anne-Sophie Mutter and the violist Yuri Bashmet.

It came as a surprise, then, to find that Mr. Previn had given his soloists little to do. Though relatively compact at 20 minutes, the two-movement concerto is crammed with passages alluding to a variety of styles, all conservative and essentially tonal.

Mr. Bashmet opened with a slowly winding figure; Ms. Mutter took it up and sweetly responded as a clarinet shadowed them both. A skipping low-brass fanfare set the soloists scampering in tandem across a changeable landscape. A brittle theme with snare drum suggested music by Shostakovich or Walton, and elsewhere sumptuous orchestration recalled Ravel’s opulence and Korngold’s caloric grandiosity.

Yet time and again, Ms. Mutter and Mr. Bashmet took to the sidelines for extended stretches, which the St. Luke’s players filled with jazzy trumpet statements, pastoral oboe soliloquies and the like. The second movement’s climax came in a riotous clash of carnival tumbles and pratfalls, and a gentle conclusion with whispering violin and harp felt like a splendid afterthought.

Ms. Mutter, who was once married to Mr. Previn, later returned as the soloist in his Violin Concerto, composed for her in 2001 and bearing her name. Here Ms. Mutter was used to her full capacity with sweetly sung melodies, racing figures and grand gestures. Mr. Previn’s diverse stylistic inclinations were equally evident but blended together more organically.

Another guest, the soprano Renée Fleming, was featured in two works Mr. Previn conceived for her. From the opera “A Streetcar Named Desire,” in which Ms. Fleming created the role of Blanche Dubois, the arias “I Want Magic” and “I Can Smell the Sea Air” accentuated her considerable charisma with shapely lines and soaring high notes. She brought a showy Southern twang to both.

Richer and more beguiling was “The Giraffes Go to Hamburg,” a melancholy setting of a text by Isak Dinesen, performed by Ms. Fleming, Elizabeth Mann on alto flute and Mr. Previn at the piano.