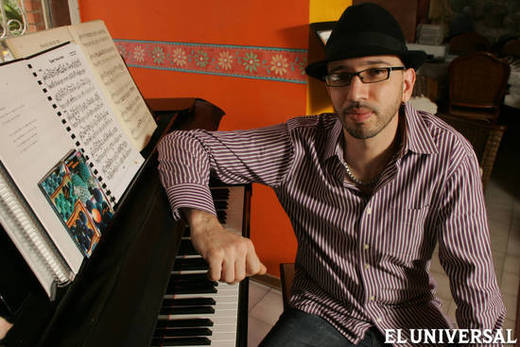 Gonzalo Grau’s show at the Brooklyn Masonic Temple on Wednesday night began in the back of the room, with rhythm and voices. Four members of his group strolled down the center aisle, playing and singing, then taking root in a rumba circle on the dance floor near the stage.

Next the white-suited Mr. Grau, bald and skinny and luminous with energy, entered from the side with a guitar, singing a countermelody and claiming another spot. The first four drifted over to him and were joined by others; a trumpeter on the balcony accompanied with solos, quotingMozart and Ravel. The singers began a harmonized chant, and then a string quartet onstage — members of the Brooklyn Philharmonic — picked up that chant.

Mr. Grau took the stage and clapped a clave rhythm to it, and then his 12-piece band, La Clave Secreta, started an arrangement of his “Frutero Moderno,” a fruit-seller’s pitch doubling as a praise-song for the richness of Latin-diaspora culture.

A young Venezuelan composer who graduated from the Berklee College of Music in 1998, Mr. Grau has worked in Latin dance music and classical music, particularly in high-profile collaborations with Osvaldo Golijov.

He’s resourceful: his recent self-produced CD, also called “Frutero Moderno,” was largely assembled on his laptop, and it has been nominated for a Grammy. But it is likely that the connection with Mr. Golijov spurred Wednesday night’s show, which was part of the Nuevo Latino Festival, programmed by the Brooklyn Philharmonic.

The idea of the festival is to highlight emerging Latin-American composers, and the Philharmonic’s director, Michael Christie, had the smart notion to mix the classical with the popular. So on Wednesday, between long portions of La Clave Secreta, the string quartet alone played some Piazzolla and a piece by the young composer Gabriela Lena Frank. It also played with the band, and though it could seldom be heard, that was all right. All the string players ended up on their feet and dancing.

Mr. Grau’s band doesn’t play classicized salsa and timba. It plays the real thing, but with a heightened sense of composition.

In one sense he’s picking up the thread of the ambitious composers of salsa from the 1970s. He’s keeping intact the jazz horn arrangements, Cuban tumbao bass lines and vocal choruses and improvising. In another sense he’s trying to modernize and globalize. He infuses his work with specific rhythmic traditions and song forms, including Cuban danzón and Spanish flamenco, and he noted with effusive pride that his band has members from Brazil, Israel, the Netherlands, Senegal, Greece, Costa Rica, Venezuela, Texas and Omaha.

There was urgency in the sonero sections of the gig, when the singers Manolo Mairena and Alex Alvear broke out of the chorus to ad-lib. But at the end, on Mr. Grau’s song “Fachada o Nada,” something unexpected happened: The Cuban singer Pepito Gomez appeared.

Mr. Gomez, who was a member of the band Pupy y los que Son Son before he left Cuba last year and settled in Miami, is another order of performer. For about five minutes he improvised in his thundering, needling high voice, finally settling on a narrow pitch area, starting every torrent with “oye!,” making the band members look at one another in astonishment and play harder.