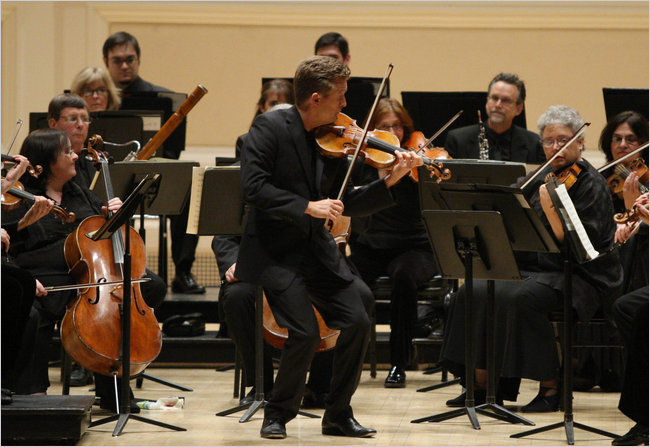 Surely Christian Tetzlaff is too serious an artist to take a run at the speed record recently set by the British violinist Oliver Lewis in Rimsky-Korsakov’s “Flight of the Bumblebee.” Or is he?

Mr. Tetzlaff, the 44-year-old German violinist, opened his season-long Perspectives series at Carnegie Hall on Thursday evening with the Orchestra of St. Luke’s. It seems that he has always wanted to be, among the obvious other things, a concertmaster.

He directed performances of Schoenberg’s “Verklärte Nacht” and Haydn’s Symphony No. 80 in D minor from the first chair on a raised platform, mostly fiddling with broad gestures and occasionally, in tricky passages of the Schoenberg, beating time like a conductor. But Mr. Tetzlaff the virtuoso soloist also showed up, in Mozart’s familiar Violin Concerto No. 3 in G and Sibelius’s Suite for Violin and Strings (Op. 117), a seldom-heard miniature that Mr. Tetzlaff has recorded for Virgin Classics.

Strange to say, the suite must be considered a late work of Sibelius, though it was written in 1929, almost three decades before his death in 1957. It was perhaps the last work he finished before he quit composing, and he suppressed it throughout his life.

It is certainly not a late work in any profound sense, with, say, lofty summing up or reflection. After two movements of pastoral melody, “Country Scenery” and “Evening in Spring,” it arrives at “In the Summer,” a breakneck display piece for skittering violin over pizzicato strings. This is aptly accompanied on a YouTube audio clip of a Tetzlaff performance by a photograph of a bee, but alas, sitting still, at work on a flower.

Mr. Tetzlaff dispatched the piece here in what must have been record time, and the orchestra struggled gamely to keep up. It was great sport, the only reason to play the piece in the first place. Mr. Tetzlaff put the St. Luke’s band through its paces in the Haydn symphony as well, and these expert players rose spiritedly to the challenge, ever alert to the quirky shifts of mood. More soberly but just as authoritatively, Mr. Tetzlaff led some 30 string players through the orchestral version of Schoenberg’s masterpiece of supersaturated Romanticism, “Transfigured Night,” maintaining much of the shimmering, quivering transparency of the original, for six players.

The Mozart concerto presented Mr. Tetzlaff in his most familiar guise, as commanding soloist. He also led the orchestra, though in this case, with Mr. Tetzlaff squarely facing the audience, his direction basically consisted of trusting the players to follow, as they did with no apparent difficulty.

Mr. Tetzlaff supplied his typical purity of tone and wide-ranging colorations. He also injected original cadenzas, flourishes and ornaments in all three movements.

From soloist and orchestra alike, the evening presented versatility on parade.