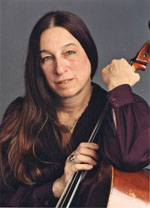 Cellist Maxine Neuman’s solo and chamber music career spans North America,South America, Europe and Japan. A grant recipient from the Rockefeller and Ford Foundations and the National Endowment for the Arts and a three-time Grammy Award winner, her biography appears in Who’s Who in the World.

She’s a founding member of the Claremont Duo, the Crescent String Quartet, the Vermont Cello Quartet, and the Walden Trio, groups with which she has traveled and recorded extensively.

She has appeared as soloist before a sold-out audience in New York’s Town Hall in the American premiere of Giovanni Battista Viotti’s only cello concerto, and for Austrophon, she recorded Schumann Cello Concerto in Count Esterhazy’s historic palace in Austria.

She can also be heard in such diverse settings as the Montreux Jazz Festival, the films of Jim Jarmusch, and with the rock band Metallica.

She has expanded the chamber ensemble repertoire – especially for multiple celli and cello and guitar – by arranging and transcribing works from every period.

A longtime champion of contemporary music, she has commissioned and premiered works by many of today’s leading composers.

Distinguished as a teacher as well as performer, Ms. Neuman has served as a juror for numerous international competitions. On the faculty since 1995 at the New York’s School for Strings and since 2002 at Hoff-Barthelson Music School, she has taught at Bennington College, Williams College and C.W. Post University.